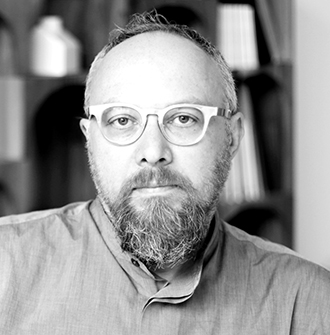 Industrial design since 1992, designs for many brands including Abet Laminati, Alessi, Danese, Elica, Foscarini, Magis, Meritalia, Moleskine. The distinctive cha- racteristics of his work is the research and definition of new object typologies, like the Mo- scardino, the biodegradable spoon/fork designed with Matteo Ragni and for which, in 2001, he has been awarded with Compasso d’Oro. In 2009 he was awarded the prize for innovation – Premio dei Premi – by the President of the Italian Republic for the Coop Eu- reka project, which brought the design in the large-scale retail trade. In May 2009 the Triennale di Milano held a solo exhibition entitled “Giulio Iacchetti. Disobedient objects “. In November 2012 he launches Internoitaliano, the “factory network” made up of many craf- tsmen labs with whom he signs and produces furniture and accessories inspired by the italian way of living.